Not only is the lotus flower beautiful, with its pink or white petals, the flower has great, even sacred, significance across many cultures. A prevalent symbol in modern-day yogi culture, the lotus was used as food, medicine, and as spiritual representation in multiple belief systems across South and East Asia for over 3,000 years. Because the lotus flower typically grows in shallow, often muddy waters, but yet grows into a beautiful flower, the flower often represents the human ability to be something beautiful and pure despite the human condition.

In yoga, the Lotus Pose is a foundational meditation asana where the human body emulates the blossoming of the lotus: Seated with a grounded pelvic floor, open hips, and an erect spine for the free flow of energy up through the chakras to the crown. Sahasrara, or the crown chakra, is translated as a thousand petaled lotus flower - no coincidence that the symbol for the crown chakra is a lotus flower.

In Hindu tradition, multiple deities, such as Shiva and Ganesh, are depicted resting on a lotus. The Bhagavad Gita likens the lotus flower to spiritual self-actualization, describing a person free from attachment who performs their duties without the distraction of material gains. 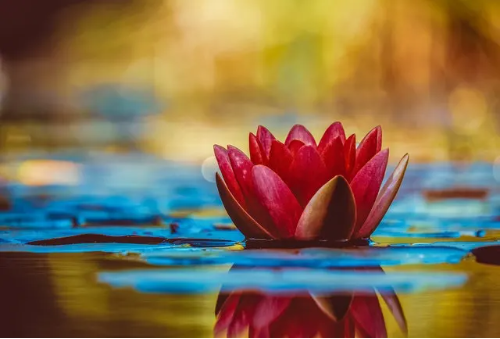 In Buddhist tradition, the lotus is one of eight sacred symbols, representing purity and rebirth. The mud the lotus grows from symbolizes suffering, the lotus, faithful devotion, with each petal a stage towards enlightenment. Legend says that when the Bhudda took his first steps, lotus flowers appeared.

Next time you come to lotus pose variation, stay here for a few more minutes to envision your body as the lotus flower. Maybe use a meditation pillow to sit up tall, ground your body to the earth as a lotus that roots itself in the mud, quiet your mind as you focus on your breath, feeling your hips open as your energy rolls up your spine through your thousand petaled crown, maybe even expanding your awareness to the ethereal. Know you are simultaneously part of the earth as you beautifully transcend. 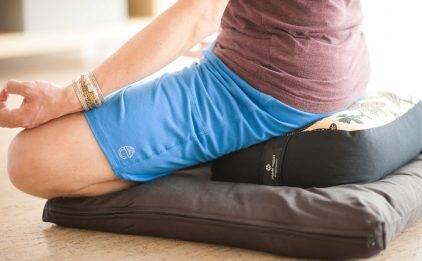